Note: This blog post is part of the course AWS Intro Node University. You can follow the text tutorial here or watch my free preview video screencasts, or watch the entire course as a Node University premium member.

Luckily, since your tech stack is built on AWS, you can take advantage of the automation with launch configurations and autoscaling groups. You can monitors any spikes in traffic or any other metric like failures, CPU load or not having enough disk space and then scale up or down accordingly.

In this tutorial, we will go through the following steps and this is a high-level overview of what you’ll be doing:

Onward! Next are the details of the autoscaling implementation

1. Create an EC2 Launch Configuration for One Instance

Log in to the web console (use us-west–1 N California region) and navigate to the EC2 dashboard. Select “Launch Configuration” to start the wizard. 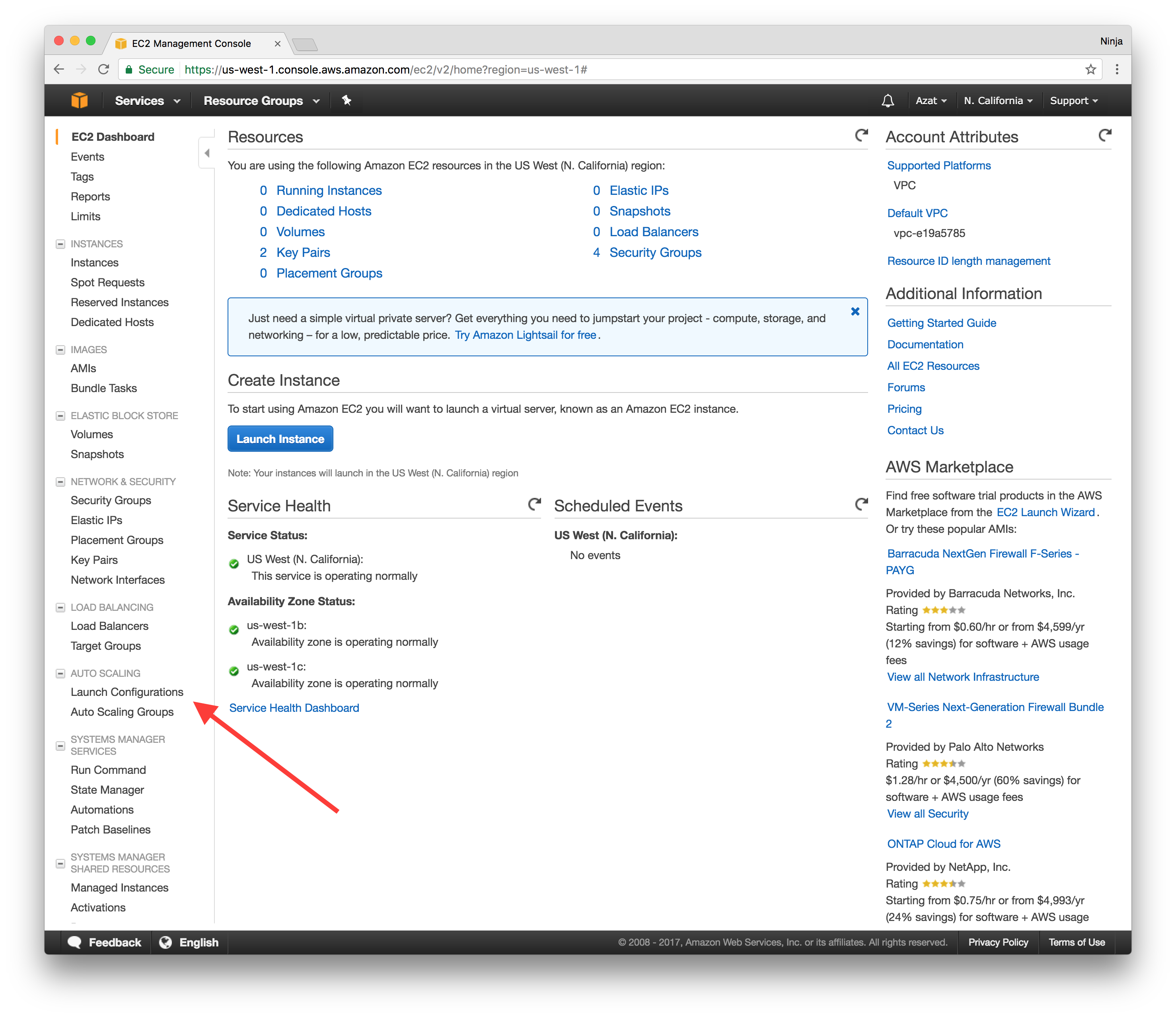 The Launch Configuration wizard is very similar to the Launch instance wizard. You will need to specify image(s), instance(s) type(s), volume(s), etc. 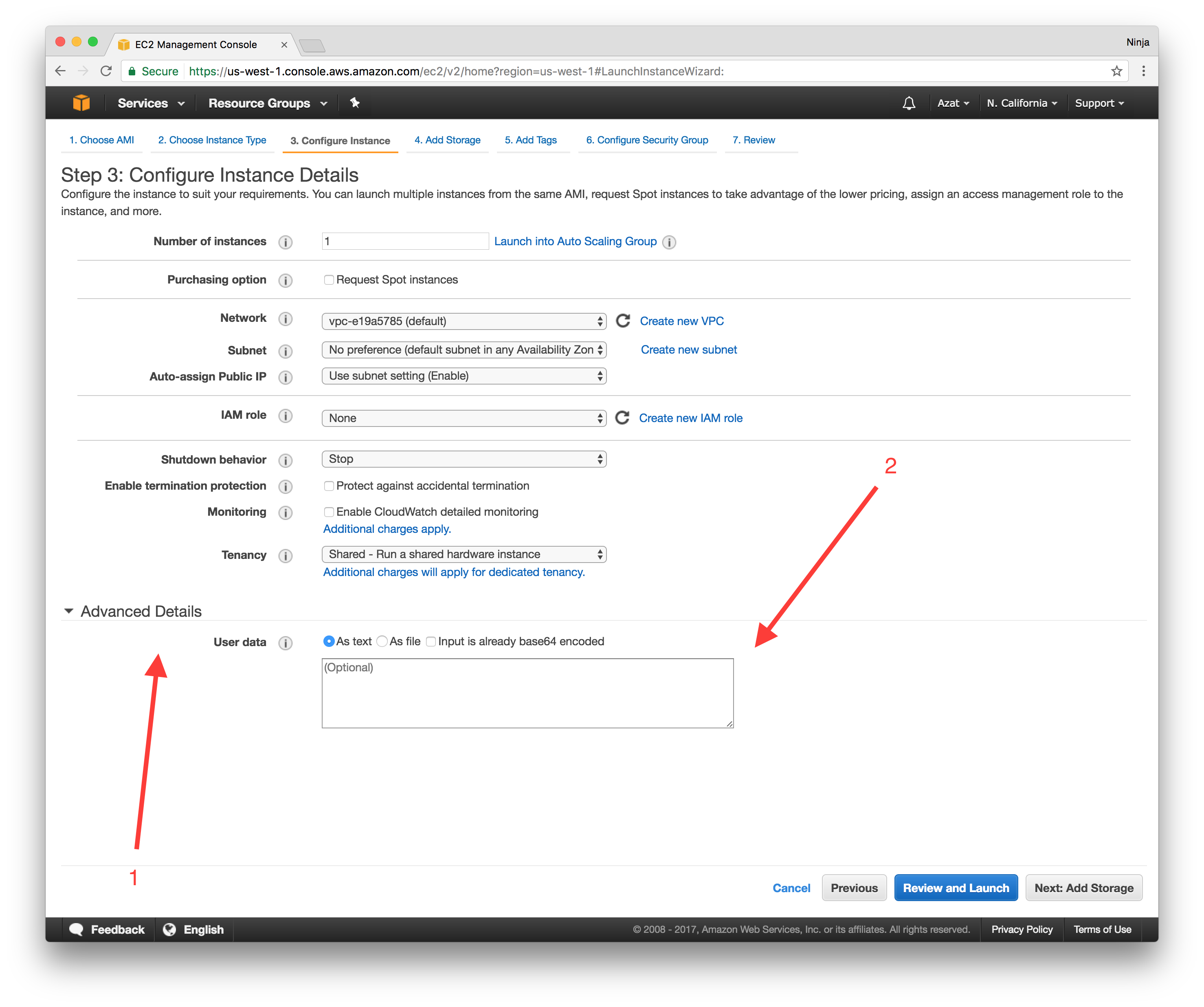 On the next screen 2. Choose an instance type, select “t2.micro” (Free tier eligible).

Select Next to proceed to the step 3 Create Launch Configuration. Enter the configuration name (arbitrary, could be foobar, but try to give it a meaningful name). Now configure the User Data which will install and run Node web server. The code was made slow so we can test autoscaling easier. To do so open Advanced settings as shown on the screen capture below:

Paste the following code for bash command into User Data. For bonus, change the Hello World to Hello {YOUR_NAME}.

On the step 5: Security Groups Add have at the very least these protocols and ports open:

If you are curious, here’s the code for the slow Node Hello World server. I intentionally put a for loot there to consume extra CPU cycles. 😈

Once you create the launch configuration (think of it as a blue print), create an autoscaling group. On the first screen 1. Configure Auto Scaling group details, select the following:

You will need to create two alerts (AWS CloudWatch). You can do it right from this screen (see screencaptures). Make sure to use 1minutes, otherwise you’ll have to wait longer for the alert to kick in (15min, 1hour, etc.).

And this is the decrease alert which is basically the opposite of the increase alert. You don’t have to set up notification but it’s rather easy to do if you want to get email (or any other) alerts via AWS SNS.

The end result should look like this with 2 policies and their alerts (and instance range 1–2): 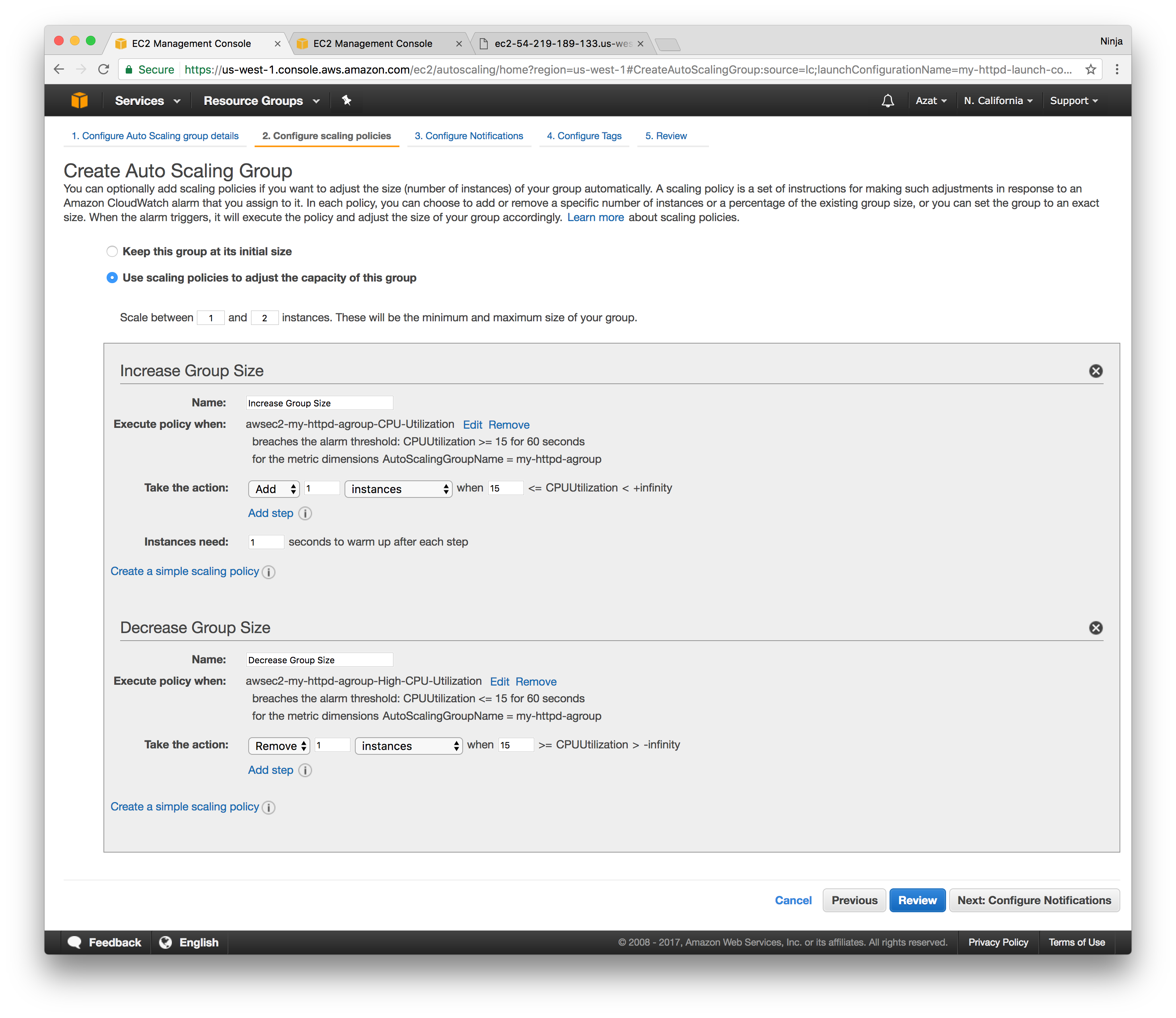 On 5. Review, review everything and then select “Create Auto Scaling group”.

Select “Close” to get back to the EC2 dashboard… on the Auto Scaling Groups, you’ll see a new instance in the bottom menu (Instances tab) as shown below: 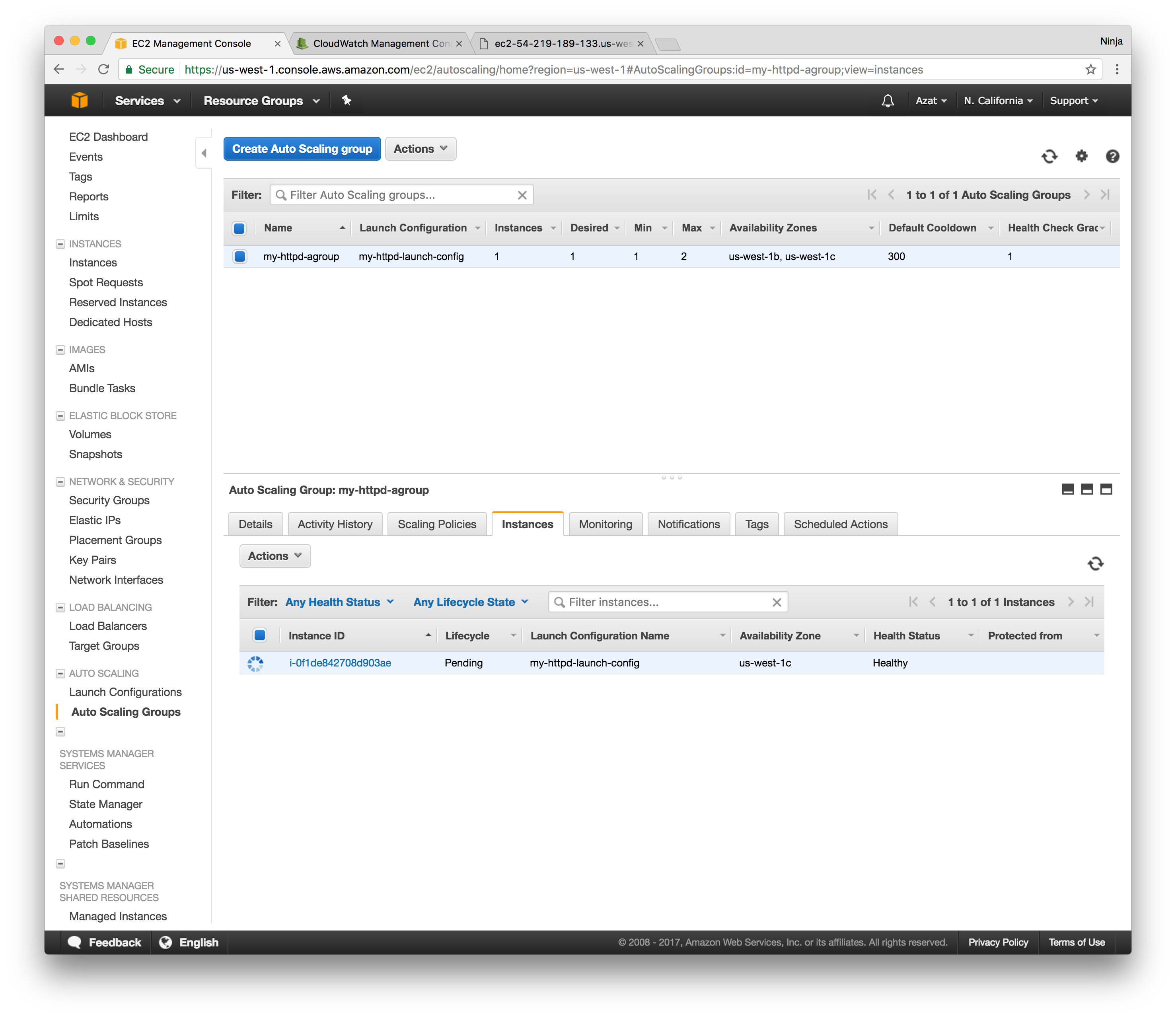 You can click on the instance ID or find it in the Instance. Copy the public URL for the newly created EC2 instance. Paste it in the browser to navigate to the web server. You’ll see the index.html page with the “This is my cool HTML page” heading.

Alternatively, execute curl from your developer machine to see the HTML response:

The next lab will be all about ELB, but if you are already familiar with ELB, then implement app ELB, add target group and attache it to the autoscaling group.

First, create an app ELB (not classic) from the EC2 console. Select public and IPv4 and proper listeners to open port 80 (at least). Then, pick a name for the new target group as shown below. 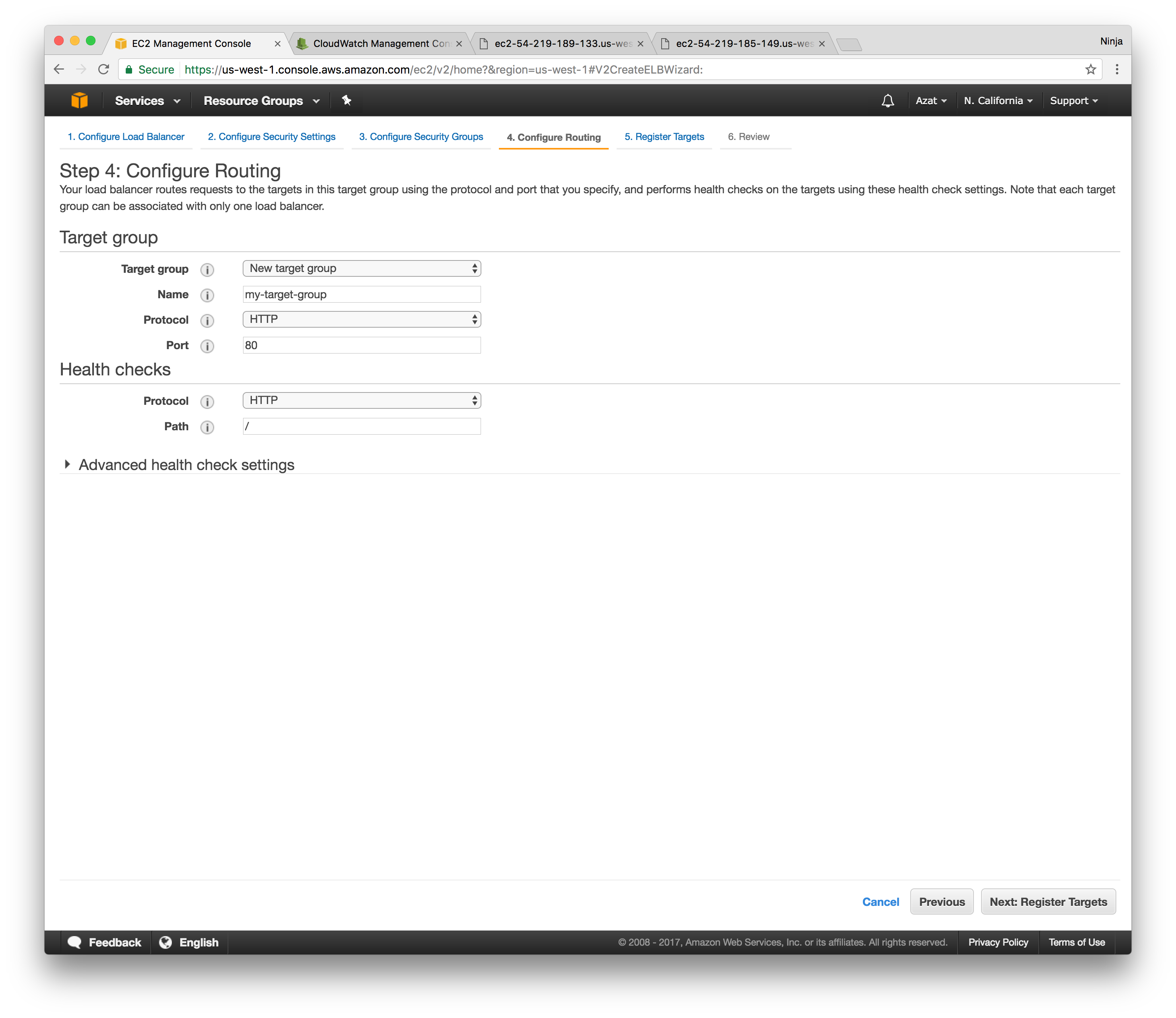 On the next step, register the instances launched by your autoscaling group (use ID if you have more than one instance running). See sceenshot as an example—your IDs and names can and probably will vary: 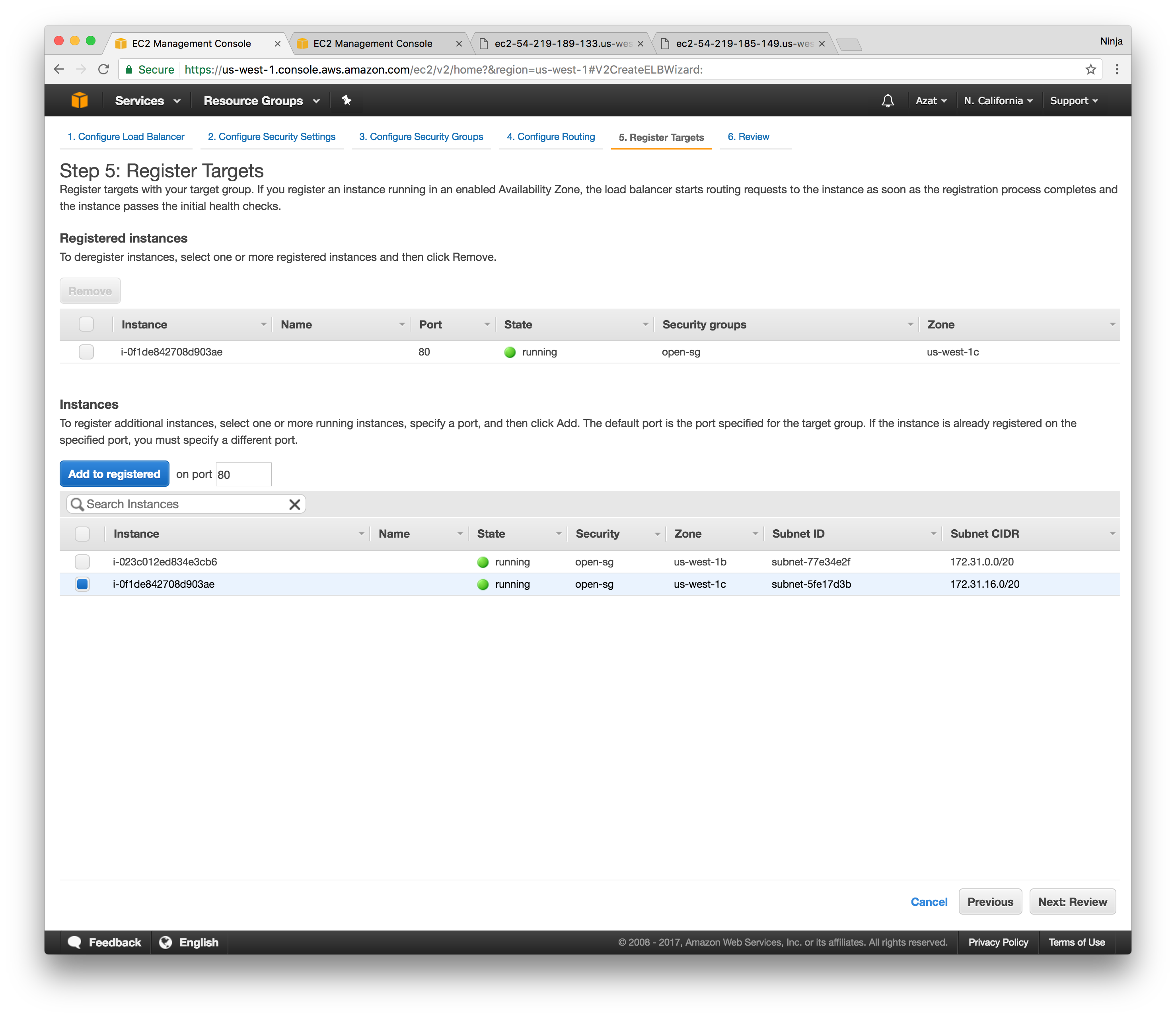 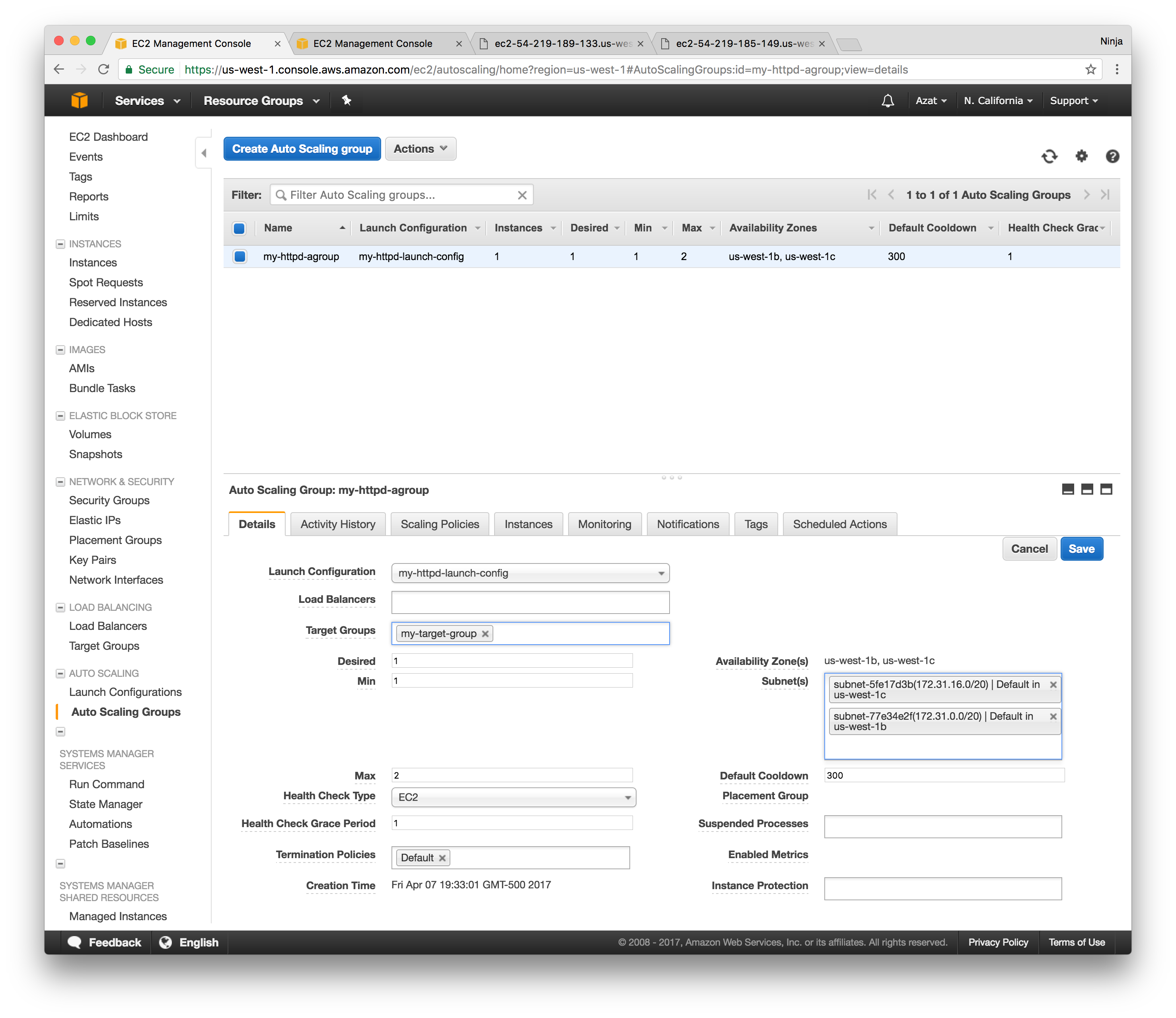 Again. This step is optional because we are really working an an autoscaling group but typically developers use ELB with autoscaling feature so that’s why there’s this step 2.a. but it’s optional. We will do another lab just on ELB soon.

If you did step 2.a., then use the LB URL (DNS name). If you skipped 2.a. that means you don’t have a load balancer so just use the DNS or public IP of your single instance under the autoscaling group.

Stress test the heck of your web server for at least one minute and then check in the EC2 console that the new instance was launched by the autoscaling group.

I recommend using loadtest library which is light weight CLI tool written in Node and available via npm. To install loadtest, simply (assuming you have Node and npm—npm comes with Node) run in your terminal / command prompt:

You can also use Apache ab or JMeter. Good tools for stress testing but not as simple as loadtest in my opinion.

Or if you don’t use ELB, the command will look something like this

Keep in mind that because the port is 80, there’s no need to specify it in the URL (like we did with 3000 in the previous lab). 80 is the default port for HTTP.

In the command above -c means concurrency and --rps means requests per second for each client. 100 and 200 should give enough troubles to t2.micro instance to ramp up the CPU load to hit the 15% threshold. This in turn will trigger the alarm to increase instance count by one. Wait for 1 min (make sure you alert period is 1 min). Go to EC2 console and check for the new instance create by the auto group. Adjust rps and concurrency as needed if the alarm hasn’t been triggered.

If you used ELB (2.a.) then CPU load will decrease and decrease alert might be triggered with time. If you didn’t implement ELB, then simple stop stress testing and observed the removal of one instance so the total count is back to one.

No new instances: If you need to edit an alert because you noticed a mistake (maybe you forgot to select 1 min instead of 15min), you can still edit the alert but you’ll need to open a new tab and navigate to the AWS CloudWatch | Alerts. Find that alert by the name and edit it there, then come back and review.

No Hello World: SSH to the EC2 instance and find the node process by

Also, check security group to see if port 80 is open for HTTP.

Amazon Web Services (AWS) offers a wide variety managed services Elastic Compute Cloud (EC2) being probably the most popular. EC2 offers an autoscaling feature which will automate the scaling up and down upon certain event. The more you can automate the better!

For more AWS tutorials, there are other posts in this series on Amazon Web Services:

Lastly, make sure to checkout some free preview lectures of NodeU courses: 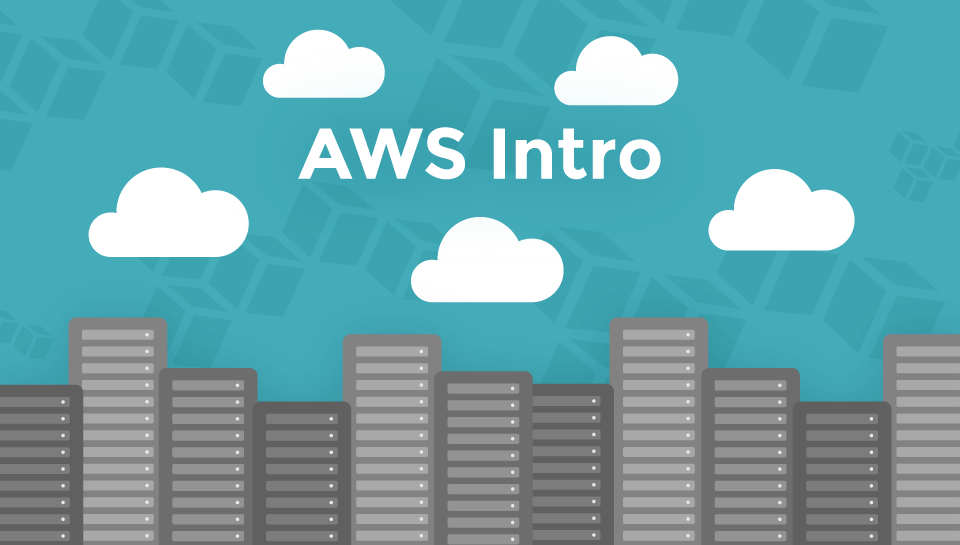